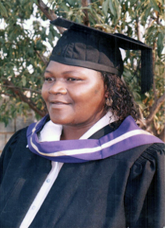 Florah Dikeledi Melaong was born on the 14th of February 1964, in a small town called Hammanskraal (North of Pretoria). She is the first child of the late Samuel and Sarah Mashaba. She started school in Hammanskraal Pretoria at Marotala Primary School in 1970. She then proceeded to Hanskekana High School where she completed her matric in 1985.

Flora married Paulos Melaong in 1986, and they were blessed with four children. In 1990 they moved from Pretoria to Vaal area.

In 1993, Flora studied at Braamfontein training centre, receiving her degree in Remedial and Basic Training in Early Childhood Development.

She pursued further studies in 2005, this time in theology at the Timothy Training Institution. (NQF level 4 on spiritual leadership) from then another 3 years with Team Work Impact Bible College from 2005–2007. 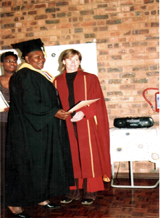 Flora went on to study at Edutak College in Pretoria, where she received her diploma in Early Childhood Development. Always the life-long learner she inspires her students to be, in 2010 she completed an elementary fire fighting course through Emfuleni Municipality.

Flora opened her own ECD, the Lethabong Nursery School, in 1993, and in 2006 opened the 4 classroom facility constructed with funds from SidebySide and in-kind donations from South Africa partners. It continues to operate as a successful model, serving 100 children.