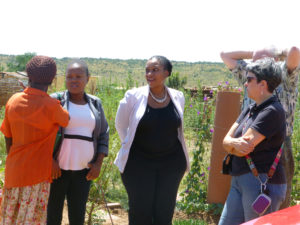 Mpho Eunice Molakeng was born in 1987, in Sebokeng, South Africa. She was the youngest of six children, along with her two brothers and three sisters. Her father abandoned the family while she was just an infant, and she was raised by her mother, who also foster parented many other vulnerable children who had been orphaned or abandoned.

When her mother passed away in 2005, Mpho’s world fell apart, and she became deeply depressed. Angry and bitter, she withdrew from friends and family. One Sunday morning, at the end or her rope, she decided to go back to Maranatha, the church who’s pastor had conducted the funeral services for her mother. The sermon that day was about the loss of someone you love, and when the invitation was extended for testimonies, she stood up and started crying in front of the whole congregation as she told of losing her mother. Rev Mike Betha gave her a warm hug and she felt the touch of God that day. That’s when God started to heal Mpho’s broken spirit, and a burning desire to serve Him filled her heart.

Since that day, Mpho has completed courses in business management, peer education, HIV/AIDS facilitation, psycho-social support skills development for community services, leadership training, parenting and behavior management, Life At The Crossroads curriculum training, and has completed the Home Community Based Care Management Skills Program. With the help of Agape Lerato Community Services (NPO) she attended the National Computer College where she studied office management, MS Access, Excel, PowerPoint and Word 2007. She is currently working toward her Bachelor of Social Work Degree.

In 2009, at the age of 21, Mpho established Etelang Pele (NPO) which brought her back full circle to her mother’s life passion: serving orphaned and vulnerable children, providing daycare and early childhood education, providing emotional support, and meeting their critical social needs. She began with 10 volunteers, and today, using Maranatha’s Community Center which SideBySide helped construct, 80 staff and volunteers work through Etelang Pele to bring hope and God’s love to their community.